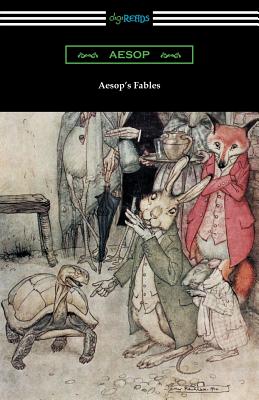 Aesop's Fables (Illustrated by Arthur Rackham with an Introduction by G. K. Chesterton)

The history of the fable likely does not originate with Aesop; however it is with him that we associate the fable's most ancient of known origins. Little is actually known of the life of Aesop. According to the historical accounts of Herodotus, Aristotle, and Plutarch, he was a slave from the Greek island of Samos who lived between 620 and 564 BC. Described as a strikingly ugly man he is said to have secured his freedom through his cleverness. Known for his wit, Aesop would become employed as an advisor by kings and city-states. The simplicity of the fable cannot be overstated. The short narrative form and the use of animals to personifying particular human characteristics makes the fable a particularly useful form of instruction for imparting bits of wisdom to children. Dozens of fables have been attributed to Aesop, however given their sometimes conflicting moral lessons, the attribution of some fables to Aesop is considered by certain scholars as to be spurious. Collected together here are some of the most famous examples of Aesop's fables. This edition follows the translation of V. S. Vernon Jones, includes an introduction by G. K. Chesterton, is illustrated by Arthur Rackham, and is printed on premium acid-free paper.

Aesop's Fables (Illustrated by Arthur Rackham with an Introduction by G. K. Chesterton)