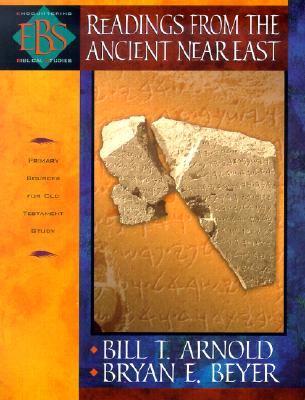 Essential to a proper understanding of the Old Testament is a knowledge of the political, historical, and theological environment of the ancient Near East. While there is an abundance of material explaining this environment, primary source texts are often unavailable or inaccessible to the beginning Old Testament student.

This volume in the Encountering Biblical Studies series fills that void. Readings from the Ancient Near East takes the student through a wide variety of primary source texts from the ancient Near East that illuminate every book of the Old Testament. It is the companion volume to Encountering the Old Testament, coauthored by Bill Arnold and Bryan Beyer. The editors have compiled this volume with the beginning Old Testament student in mind. The selections are intended to move a learner with little or no knowledge of the ancient Near East to a basic understanding of its significant texts and authors. Texts spanning more than two thousand years include Sumerian creation accounts, epic literature from Mesopotamia, cultic ritual texts from Egypt, and prophetic references from Syria. Readings from the Ancient Near East will surely become a standard text for professors, students, pastors, Sunday school teachers, and serious lay readers.