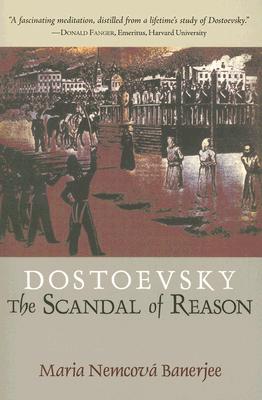 Dostoevsky: The Scandal of Reason

Praise for Dostoevsky: The Scandal of Reason "In a series of compelling, enlightening, and challenging essays Professor Banerjee looks at 'Dostoevsky's novelistic world as an intellectually coherent, spiritually integral whole.' Her examination culminates in a brilliant attempt to provide a reasonable, rational, and verbal indictment of reason itself--comprehending and complementing the message of love and gestures of Dostoevsky's positive heroes. Students and scholars of Russian and comparative literatures will find here a compelling case for Dostoevsky's embrace of Christianity as his rebuttal to rationalist philosophy."
--Thomas R. Beyer, Professor of Russian, Middlebury College

"This work is based on Maria Nemcov Banerjee's many years of teaching and reflecting on the meaning of Dostoevsky's novelistic world and worldview. Her grasp of his religious imagination is firm and her interpretations are challenging. Professor Banerjee is a trustworthy guide in analyzing Notes from the Underground and The Brothers Karamazov.
--George A. Panichas, Editor of Modern Age: A Quarterly Review "Maria Nemcov Banerjee situates her work in a tradition of Dostoevsky interpretation that features such names as Berdyaev, Ivanov, and Soloviev. It is therefore no surprise that her study Dostoevsky: The Scandal of Reason gives voice to a passionate and committed reading, filtered through a close attention to both text and context. Taking as her starting point Dostoevsky's famed dictum that, were Christ in reality to be outside truth, he would choose Christ over truth, she shows how, for Dostoevsky himself, it is actually our modern, rationalistic conceptions of truth that come out worst. If Ivan Karamzov's 'rebellion' has provided modern atheism with one of its most powerful weapons, a close reading of The Brothers Karamazov demonstrates not only that Ivan's logic is flawed, but that he himself knows that it is. Clear, committed, and with the resources of extensive scholarship behind it, this is a book that gives further thrust to the current revival of interest in Dostoevsky's contribution to modern religious thought. As such it will be welcomed by students and teachers and, indeed, by those who read Dostoevsky simply because he is a great writer from whom we all have much to learn."
--George Pattison, Lady Margaret Professor of Divinity, Oxford University "A fascinating meditation, distilled from a lifetime's study of Dostoevsky. With exquisite tact Maria Banerjee traces the workings of Dostoevsky's art--and of his thought within and through the art--as she navigates the depths of the masterpieces that initiate and conclude his major period, Notes from Underground and The Brothers Karamazov, tracing the dialectic of reason and faith that is the hallmark of his contribution to the novel and to world culture."
--Donald Fanger, Harry Levin Professor of Literature, Emeritus, Harvard University "Maria Banerjee provides an elegant, provocative reading of two of Dostoevsky's masterworks, Notes from Underground and The Brothers Karamazov. Her theme is the harm that reason can do to the human soul if it is divorced from the higher spiritual powers within it. The separation of reason from the other human faculties is a fundamental theme of Russian religious philosophy. Thus her understanding of Dostoevsky's worldview is formed by the philosophical commentaries of Solovyov, Ivanov, and Berdiaev. In passing, she gives us a panorama of Russian intellectual life of the nineteenth century, showing how Dostoevsky was influenced by and reacted against such figures as Belinsky, Bakunin, Chernyshevsky, and Herzen. Banerjee has successfully accomplished what should be the final goal of such a work: to send us back to the masterworks themselves, which we will now reread with a deeper comprehension."
--Boris Jakim, preeminent translator of works by S.L. Frank, Pavel Florensky, and Sergei Bulgakov.

Title:: Dostoevsky: The Scandal of Reason

Dostoevsky: The Scandal of Reason