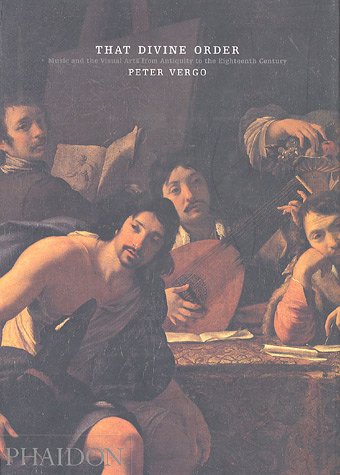 That Divine Order : Visual Arts from Antiquity to the Eighteenth Century

The Western mind has been persistently fascinated by a supposed, yet elusive, point of connection between music and the visual arts. From ancient Greece, we receive the tradition of music taught as a discipline of mathematics, tones on a scale governed by the division of whole numbers. In the Middle Ages, the musical scale was understood as an image of Order - the perfect organization of the universe by the hand of God. Into the twentieth century, philosophers, artists, musicians, mathematicians and architects all alike have proposed various 'concerts for the eye' -- works of art created through the synthesis of color, form and the structure of music. Peter Vergo, a professor of art history and theory at Essex, 'makes direct and detailed comparisons between musical and pictorial practices in the long period covered by this book.' He examines the culture, practice and theory of music and the arts over time, and the result is a 'compelling exploration of ideas that reveals how deeply musical principles influenced the theory and criticism of the visual arts.' Appropriately, this book is beautiful to behold as well - a bit oversized, satisfyingly weighty, the book and jacket design expertly crafted.

Ever since antiquity, philosophers have pointed to the supposed 'divine' character of music, and following Pythagoras's discovery of the mathematical basis of the musical scale, have posited a link between the mathematical order of music, the physical order of the universe and the moral order of human society. Both practising artists and moralists came to believe that, by demonstrating an analogy with music, they could claim a dignity and value for their art - whether painting, architecture or sculpture - that it might otherwise lack. music believed to enjoy, by comparison with the visual arts? order to which visual arts should aspire. But on what evidence was this belief in the inherently systematic character of music based; and in practical terms, how might visual art seek to emulate any such divine order or system? In what way might Gothic cathedrals have been based on systems of harmonic proportion? How did Poussin's search for a compositional principle derived from antique 'modes' in music resemble, or differ from, Palladio's attempts to embody musical 'harmonies' in architecture? And how did each artist conceive of the sense and value of such analogies? first time, Professor Vergo makes direct and detailed comparisons between musical and pictorial practices in the long period covered by the book. He also provides a broad analysis of changes in the character of the analogies drawn at different times, using in his analyses critical and philosophical sources as well as evidence about artistic and musical practice. practising artists and musicians, to students of cultural history and those concerned with aesthetic theory and interdisciplinary studies.

Title:: That Divine Order : Visual Arts from Antiquity to the Eighteenth Century

That Divine Order : Visual Arts from Antiquity to the Eighteenth Century