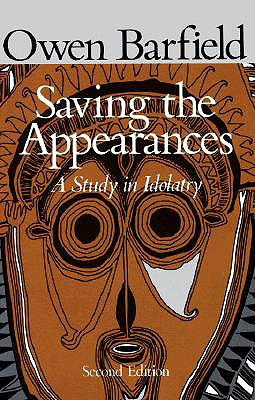 Maybe the best known of Barfield's books, Saving the Appearances professes itself to be 'not so much a new discovery or a new idea as a different 'slant'' (to quote the author) on the history of human consciousness. Rather than seeing man (as Sartre did) as a being condemned to freedom-a hollow man by all accounts-Barfield sees him to be 'the theatre on which participation has died to rise again.' Just exactly what he means by that requires a dedicated reading of Barfield's particular, and original, approach to Christian perplexities. Drawing illustrations from mythology, philosophy, history, literature, theology, and science, Barfield chronicles the evolution of human thought, tracing the disappearance of what he terms participation (a vague but immediate awareness of the meaning of phenomena) and the subsequent appearance of symbolism (the experience of phenomena as representations). He calls this latter experience, in its extreme form, idolatry. To move past idolatry a responsible use of imagination must be envisioned and enacted. As Barfield puts it, this requires the ability 'to experience the representations [of phenomena] as idols' and then be able to participate in them 'with the profoundest sense of responsibility, with the deepest thankfulness and piety towards the world as it was originally given.' Barfield names the seed of this shift the Logos. 'Henceforth,' he writes, 'the life of the image is to be drawn from within. The life of the image is to be none other than the life of imagination.' 190 pp.

Saving the Appearances is about the world as we see it and the world as it is; it is about God, human nature, and consciousness. The best known of numerous books by the British sage whom C.S. Lewis called the "wisest and best of my unofficial teachers," it draws on sources from mythology, philosophy, history, literature, theology, and science to chronicle the evolution of human thought from Moses and Aristotle to Galileo and Keats. Barfield urges his readers to do away with the assumption that the relationship between people and their environment is static. He dares us to end our exploitation of the natural world and to acknowledge, even revel in, our participation in the diurnal creative process.

Title:: Saving the Appearances: A Study in Idolatry (Second edition)