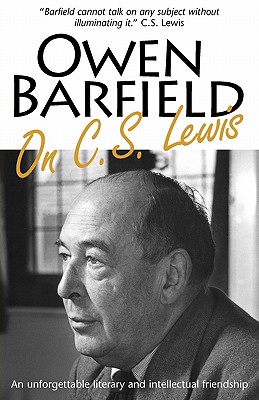 'Owen Barfield on C.S. Lewis' is a collection of essays and lectures about the author, theologian, and literary scholar, C. S. Lewis. Barfield and Lewis were close friends for 44 years, from their Oxford days after WWI to Lewis's death in 1963. Barfield's reflections on their relationship ended only with his own passing, in his hundredth year. Barfield was instrumental in converting Lewis to theism. However, the two disagreed on many points, and it is that creative dialectic which defines and irradiates their friendship: "In an argument we always, both of us, were arguing for the truth, not for victory" (Owen Barfield). C.S. Lewis on Owen Barfield: "The wisest and best of my unofficial teachers." "Barfield towers above us all." To Walter Field: "You notice when Owen and I are talking metaphysics which you don't follow: you don't notice the times when you and Owen are talking economics which I can't follow. Owen is the only one who is never out of his depth."