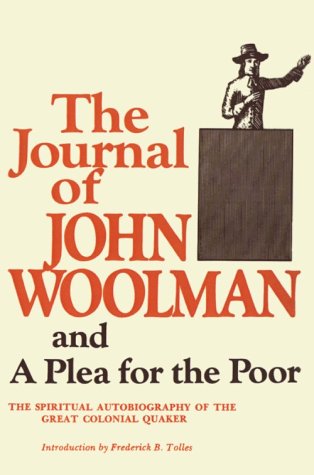 The Journal of John Woolman and a Plea for the Poor

The "journal" or spiritual autobiography of John Woolman was the characteristic literary expression of Quakerism in its first two centuries. Woolman's Journal was first published in 1774 (shortly after his death). His life, as recorded by himself, was the finest flower of a unique Quaker culture, Whose focus, as Howard H. Brinton has put it, was not on the literary or plastic arts but on "life itself in home, meeting and community," a life which was an "artistic creation as beautiful in its simplicity and proportion as was the architecture of its meeting houses..." Its distinguishing marks marks were not dogmas but practical testimonies for equality, simplicity and peace. These testimonies, once revolutionary in their social implications, were already becoming institutionalized in Woolman's time as the badges of a "peculiar people." In his quiet way-- he must have been the quietest radical in history-- John Woolman reforged them, tempered them in the stream of love, and converted them once again into instruments of social revolution.

Title:: The Journal of John Woolman and a Plea for the Poor

The Journal of John Woolman and a Plea for the Poor