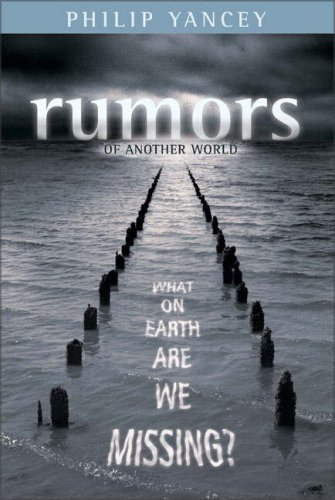 Rumors of Another World: What on Earth Are We Missing?

Apart from the glitzy, ambiguous tack the publishing company chose to take in promoting this book, we found its guts substantial and worthy of review. An established and accomplished writer (especially in matters of doubt and what he terms ''reluctant Christianity''), Philip Yancey shifts his focus away from the ''Why it's hard for me to believe'' subtext of several of his earlier books and toward the more conscious and provocative ''Why I do.'' Taking his start from reductionism, Yancey counters with ''We know how things work, but not why'' and asks, in turn, whether we are creating in proportion to our disassembling. Commenting on the visible realities of creation, technology, materialism, sex, greed and guilt, Yancey reveals the ways in which they rumor of equally tangible, though invisible, realities. Enter Christ -- the model of these two worlds united and transcended -- the most human being being the most truly human. Here Yancey discusses (in accord with Brother Lawrence) the practice of this presence and the particular vision it requires. We must also mention he's incredibly well-read and skilled at weaving his reservoir of knowledge into page-turning prose. The result? We find Rumors to be his most forthright and engaging book to date.

What on earth are we missing? Philip Yancey believes we are missing the supernatural hidden in everyday life. In Rumors of Another World, Yancey investigates the natural world and discovers the supernatural hiding in plain view. He grapples with why God made the world and what our role truly is, and seeks to answer the question, "How do I live in the natural world while expressing the values of the supernatural?" Philip writes, "I have come to understand faith as the highest form of integrated encounter. Faith puts together, assembles, re-orders, accepting the entire world as God's handiwork. We live among clues, like rescuers sifting through pieces of stained glass shattered by a bomb, and only with a blueprint or some memory of original design can we begin to connect the shards, to assemble them into a pattern that makes sense of our world. "Nature and supernature are not two separate worlds, but different expressions of the same reality. To encounter the world as a whole, we need a more supernatural awareness of the natural world." Yancey invites readers to join him on a journey of discovery. He challenges us to tune into "rumors of another world," and connect the seen with the unseen. He promises that the grace-filled result will be a life of beauty, purpose, freedom, and faith.

Title:: Rumors of Another World: What on Earth Are We Missing?

Rumors of Another World: What on Earth Are We Missing?