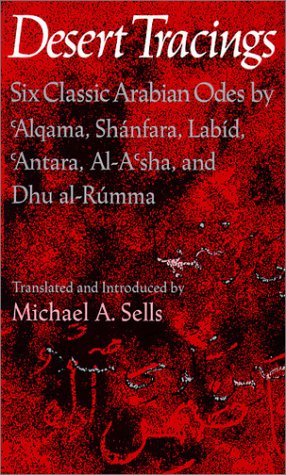 By: Sells, Michael A.

According to legend, the Bedouin tribes of pre-Islamic Arabia held poetry competitions during annual fairs near Mecca. The wining poems called Mu'allaq t, or Hanging Odes, were embroidered in gold on banners and suspended from the walls of Arabia's most sacred shrine, Ka'ba. Desert Tracings is a translation of six classical sixth to eighth century odes. Arabic codes (qasidas) traditionally begin with the relationship of the lover to the loved. Usually set at opening in the beloved's abandoned desert campsite, where the only evidence that remains is tent marks and torrent beds in the sand - "naked tracings, / worn thin, like inscriptions/ carved in flat stones" - the qasida moves gracefully through the thematic parts, the lover's grief, the quest, and the final acceptance of a world deprived of the beloved. Like the oryx-doe trapped within the unyielding cycles of the desert world.

As Michael Sells writes in his introduction, the qasidahas been overshadowed in the West by other Arabic literature, such as The Arabian Nights, but the qasidais the primary literary tradition in both pre-Islamic and Islamic Arabia. The remarkable richness of language and range of mood captured in theses translations help explain their enduring fascination.