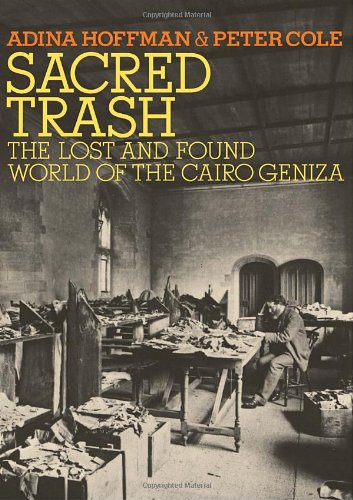 Sacred Trash: The Lost and Found World of the Cairo Geniza (Jewish Encounters)

Part of the Jewish Encounter series

One May day in 1896, at a dining-room table in Cambridge, England, a meeting took place between a Romanian-born maverick Jewish intellectual and twin learned Presbyterian Scotswomen, who had assembled to inspect several pieces of rag paper and parchment. It was the unlikely start to what would prove a remarkable, continent-hopping, century-crossing saga, and one that in many ways has revolutionized our sense of what it means to lead a Jewish life. In Sacred Trash, MacArthur-winning poet and translator Peter Cole and acclaimed essayist Adina Hoffman tell the story of the retrieval from an Egyptian geniza, or repository for worn-out texts, of the most vital cache of Jewish manuscripts ever discovered. This tale of buried scholarly treasure weaves together unforgettable portraits of Solomon Schechter and the other heroes of this drama with explorations of the medieval documents themselves--letters and poems, wills and marriage contracts, Bibles, money orders, fiery dissenting tracts, fashion-conscious trousseaux lists, prescriptions, petitions, and mysterious magical charms. Presenting a panoramic view of nine hundred years of vibrant Mediterranean Judaism, Hoffman and Cole bring modern readers into the heart of this little-known trove, whose contents have rightly been dubbed "the Living Sea Scrolls." Part biography and part meditation on the supreme value the Jewish people has long placed on the written word, Sacred Trash is above all a gripping tale of adventure and redemption.

Sacred Trash: The Lost and Found World of the Cairo Geniza (Jewish Encounters)