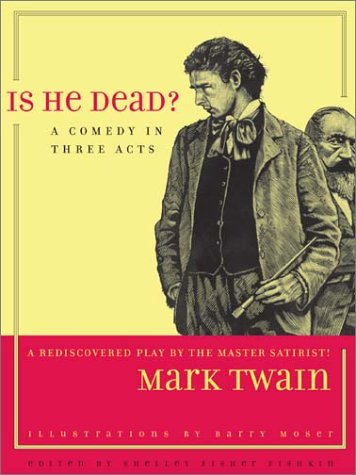 Is He Dead?: A Comedy in Three Acts (Jumping Frogs: Undiscovered, Rediscovered, and Celebrated Writings of Mark Twain, 1)

The University of California Press is delighted to announce the new publication of this three-act play by one of America's most important and well-loved writers. A highly entertaining comedy that has never appeared in print or on stage, Is He Dead? is finally available to the wide audience Mark Twain wished it to reach. Written in 1898 in Vienna as Twain emerged from one of the deepest depressions of his life, the play shows its author's superb gift for humor operating at its most energetic. The text of Is He Dead?, based on the manuscript in the Mark Twain Papers, appears here together with an illuminating essay by renowned Mark Twain scholar Shelley Fisher Fishkin and with Barry Moser's original woodcut illustrations in a volume that will surely become a treasured addition to the Mark Twain legacy.

Richly intermingling elements of burlesque, farce, and social satire with a wry look at the world market in art, Is He Dead? centers on a group of poor artists in Barbizon, France, who stage the death of a friend to drive up the price of his paintings. In order to make this scheme succeed, the artists hatch some hilarious plots involving cross-dressing, a full-scale fake funeral, lovers' deceptions, and much more. Mark Twain was fascinated by the theater and made many attempts at playwriting, but this play is certainly his best. Is He Dead? may have been too "out there" for the Victorian 1890s, but today's readers will thoroughly enjoy Mark Twain's well-crafted dialogue, intriguing cast of characters, and above all, his characteristic ebullience and humor. In Shelley Fisher Fishkin's estimation, it is "a champagne cocktail of a play--not too dry, not too sweet, with just the right amount of bubbles and buzz."

Title:: Is He Dead?: A Comedy in Three Acts (Jumping Frogs: Undiscovered, Rediscovered, and Celebrated Writings of Mark Twain, 1)

Is He Dead?: A Comedy in Three Acts (Jumping Frogs: Undiscovered, Rediscovered, and Celebrated Writings of Mark Twain, 1)