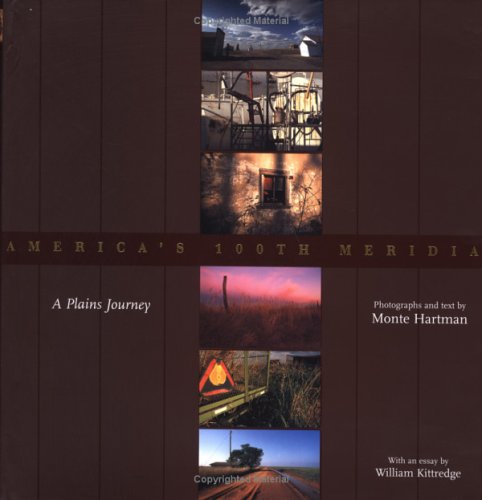 "There's no denying Hartman's] abilities as a photographer. Shape, color, and light, he has an impeccable eye for composition, for juxtaposing line against line, drawing the viewer's eye into his subject. . . . In North Dakota, he likes a flood-drenched plain in orange twilight, one stretch of barbed wire fence in a strong horizontal, another triangulating stretch (just the fence posts visible above the water) disappearing into the distance. In South Dakota, he gives us a flat plain with alternating gold, green, and brown strips of field, a dark storm building overhead. . . . Accompanying the first third of Hartman's photos is a new essay by William Kittredge (always an occasion). . . . There is no one more authoritatively positioned to comment on the West than Kittredge, nor anyone who can write about it half as well." NewWest.net"Tells the story of the region in textures of flaking paint and rust juxtaposed against stunning sunsets and big skies. Intense color photographs narrate the 1500-mile, often-inhospitable route from Texas to Canada." Texas Parks & Wildlife"A lavish and glorious new coffee-table book . . . Hartman has a gifted eye for both the natural and man-made vistas that he encounters, and his color images are breathtaking. Beginning in North Dakota and working south, Hartman presents pictures that are themselves eloquent essays in rural and small-town spaces. An aura of loneliness and abandonment clings to many of these shots. It's no secret that people have been fleeing the harsh physical and economic realities of the Great Plains for years, and these pictures document that fact. Unpainted farm houses and rickety windmills hold silent vigil amid awesome expanses of earth and sky, weeds grow through a Nebraska sidewalk, and an old truck rusts into the Oklahoma soil. . . . A testament to the alluring visual appeal of this country's great middle." Mobile RegisterResulting from an arduous series of six journeys along the two-thousand-mile line that divides East from West, Monte Hartman s perceptive photographs provide the intimate yet dispassionate observations of a person who chose to explore the meanings inherent in the great empty middle between our coasts. These images inspired William Kittredge to travel the Meridian himself. His essay, an unblinking yet sensitive musing on what once was and what now remains, offers a poignant counterpoint to Hartman s visual tapestry. This slice of North America requires stamina unimaginable to the rest of us, and is populated by enduring people who ve lost all patience with strangers when their efforts to convey their attachment to this place have fallen on deaf ears. It is not easy to know why a land so lonesome, so often melancholy, parts of which have never surpassed frontier density, will go on having such meaning to those who choose to stay. Hartman and Kittredge, discerning souls, have caught their attachment. Thomas McGuane, author of The Cadence of Grass America s 100th Meridian exposes our nation s heartland in its beauty and desolation a land as open and mysterious as the palm of God s hand. Annick Smith, co-producer of A River Runs Through It A breathtaking reminder of the beauty concentrated in that narrow slice of the continent North Dakota Quarterly An astounding coffee-table book tour . . . . A truly splendid and pristine memory, capturing timeless moments and locations Wisconsin Bookwatch A testament to the alluring visual appeal of this country s great middle Mobile Press-Register"