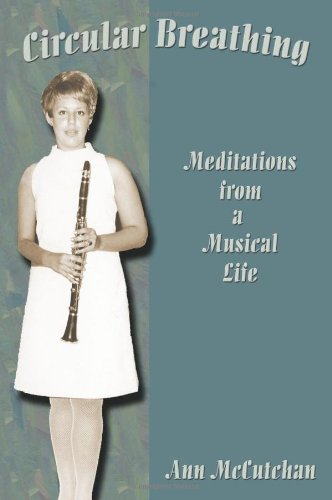 In this collection of personal essays, clarinetist Ann McCutchan uses the metaphor of circular breathing to animate her understanding of her own life as a woman, musician, and writer. Circular breathing is a technique for wind instrument playing in which fresh air is drawn in through the nose at the same time that stored air in the lungs is released by mouth through the instrument. The process allows the player to produce a continuous line of music without breaking the curve of a melody to inhale. The questions McCutchan grapples with have universal implications. For example, how does one come to be called to a life's work? For McCutchan, who grew up in central Florida in the 1960s, the call grew out of twin desires: to exercise a physical voice and to develop an interior one. Bringing both to fruition meant abandoning roles expected of young women in that time and place, and learning to live ever after with the conflicting claims of art and life. Questions of familial loss lie at the heart of this collection, as well. With a sure, delicate hand, McCutchan examines the impact of her parents' untimely deaths, her inability to bear children, and the foundering of her two marriages. Art may not deliver one from sorrow, she discovers, but it may console-deeply. Finally, there are the questions that arise when one can no longer fulfill the physical demands of an art. Can a musician trade in her instrument, and a world that defined her for decades, for something else? Here, McCutchan charts her journey from the stage to the page, exploring the ways both worlds feed each other. Ann McCutchan is the author of "Marcel Moyse: Voice of the Flute," and "The Muse That Sings: Composers Speak About the Creative Process." Her work has appeared in numerous literary journals and in "The Best American Spiritual Writing." She teaches creative writing at the University of North Texas.