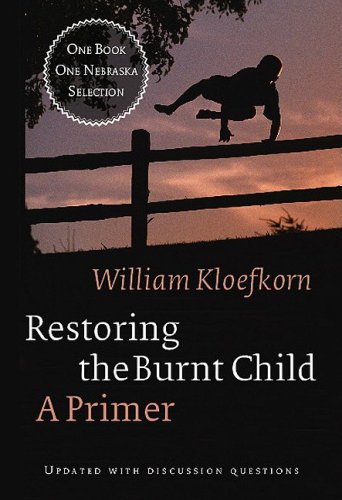 Restoring the Burnt Child: A Primer

Negotiating the no man's land between ages nine and thirteen, this memoir of a small-town boy's life in 1940s Kansas continues the story William Kloefkorn began in his much-loved volume This Death by Drowning. With characteristic humor and in prose as lyrical as his best poetry, Kloefkorn describes the unsentimental education he received at the hands of the denizens of Urie's Barber Shop and the Rexall Drugstore and at the knees of the true characters who made up his family. From the "firefly" stunt that nearly burns down his home to the distant firestorms of World War II, fire holds an endless range of subtle and surprising lessons for the boy, whose impressions Kloefkorn conveys with the immediacy, naivet , and poignancy of youth-and reconsiders with the wisdom and distance of age. By turns charming and resolute, funny and moving, Restoring the Burnt Child powerfully brings to life the lost, unforgettable world of a boy, and a poet, coming of age in midcentury middle America. William Kloefkorn (1932-2011) was an emeritus professor of English at Nebraska Wesleyan University and Nebraska's state poet. He is the author of a previous memoir, This Death by Drowning, (Nebraska 2001), and many volumes of poetry.

Restoring the Burnt Child: A Primer