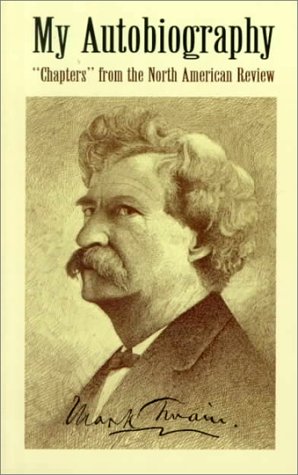 My Autobiography: 'Chapters' from the North American Review

Other than gift inscription, as new.

Published a few years before his death in 1910, these "chapters" from the autobiography of Mark Twain read much like most of his celebrated literary efforts. His plain-spoken words are at times affectionate, joyful, and reverent; at other times, they are angry or sorrowful; but always, they are genuine. Recalling the episodes of his life, his warm family relationships as well as friendships and acquaintances, his literary career, and his celebrity as one of the most lionized figures of the Gilded Age (a phrase he invented), these character sketches, essays, diary entries, letters, and other writings reveal Twain as both the subject and the storyteller.
Compiled between 1870 and 1910, the "chapters" recall a life that began in a quiet Missouri town, followed by a boisterous boyhood in Hannibal, Missouri (with recollections of the "real" Huckleberry Finn), life as a riverboat pilot on the Mississippi, his adventures as a young man in rough Nevada mining towns, and the years spent as a widely renowned author living in large eastern cities and abroad. Here also are somber passages noting the deaths of his beloved wife Livy and three of their children.
"Clemens intended his autobiography to be chatty and entertaining; he promised to stay on the topic only as long as it interested him. Thus the book is chatty and entertaining, a lively hodgepodge of anecdotes, pronouncements, and descriptions -- all of them distinctly Mark Twain." -- Publishers Weekly.

Title:: My Autobiography: 'Chapters' from the North American Review

My Autobiography: 'Chapters' from the North American Review