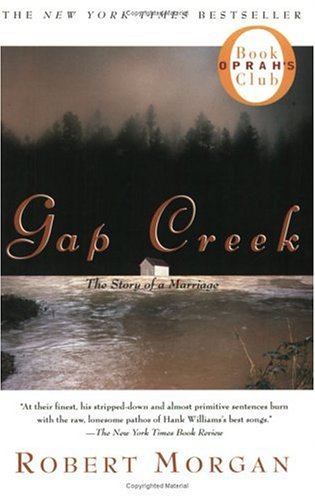 Gap Creek: The Story Of A Marriage (Oprah's Book Club)

When Robert Morgan writes a story he also makes a poem. His books convey (we quote The American Heritage Dictionary's definition of poem) ''a vivid and imaginative sense of experience characterized by the use of condensed language chosen for its sound and suggestive power as well as its meaning.'' Born and raised in the mountains of North Carolina, Morgan takes for his palette the earth and sky colors of the Appalachian high country. His characters are fire -- oranges and reds that blaze and feed on whatever life brings -- love, grief, anger, passion, joy. In the Welsh tradition of his ancestors, Morgan's voice carries a song, lean though never lacking. We illustrate (quoting Ginny in The Truest Pleasure): ''I took a long deep drink from the whiskey jug and set in the silence as though it was a cool bath on a hot day. Silence is the language of God, I thought. He prefers to speak to us that way, and through our own voices. I wanted to wait a while longer and study about things. I might not be able to think this clear again for a long time. I wanted to figure it out a little more, to see if there was some way I could understand what had happened to me. What did it come to?'' To answer Ginny's question, we quote Morgan again (from Gap Creek): '''Can you walk?' Hank said. 'Of course I can walk,' I said. I felt as weak as a newborn colt but my strength was coming back as my stomach settledaWe started walking again.''

Winner of the Southern Book critics Circle Award for fiction, Gap Creek first gained international attention when it was featured as an Oprah's Book Club selection. It tells the story of Julie Harmon and Hank Richards' first year of marriage in the last year of the twentieth century. Amidst the complexity of the modern world's encroachment on their inherently rural way of life (sustained by hard work and more hard work), Julie and Hank live at the brink of losing it all and gaining themselves.

During their first year of marriage, Julie Harmon and Hank Richards move to Gap Creek, South Carolina, where a flood that nearly kills them tests the endurance of their relationship.

Gap Creek: The Story Of A Marriage (Oprah's Book Club)