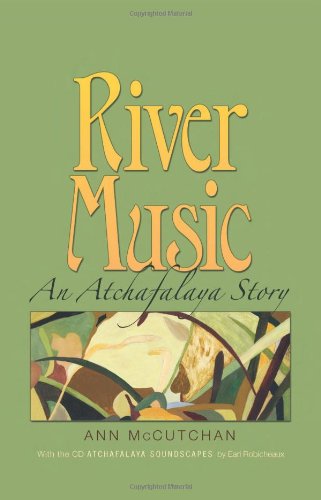 Louisiana's Atchafalaya River Basin, the heart and soul of Acadiana, or Cajun country, is the focus of this compelling narrative by Ann McCutchan. A masterful weaving of cultural and environmental history, River Music also tells the life story of Louisiana musician, naturalist, and sound documentarian Earl Robicheaux.
With Robicheaux as her guide, McCutchan embarks on a musical, visual, literary, and historical tour of the Atchafalaya, where bayous, swamps, marshes, and river delta country have long sustained nature and culture, even as industry has changed both the landscape and the people. Along the way, she and Robicheaux pay homage to distinctive voices of the region's singular soundscape, including Acadian and Native American elders, birds, frogs, alligators, wind, water, and weather, which Robicheaux chronicles in archival recordings and musical compositions for museum exhibits, radio programs, and repositories such as the Cornell Lab of Ornithology. A CD of Robicheaux's soundscapes is included with the book. In counterpoint, McCutchan recounts Robicheaux's remarkable struggles as a jazz and classical artist, Katrina victim, cancer survivor, and steadfast son of the Basin devoted to remembering, preserving, and sounding out the ecological and cultural riches of his home.
An original blend of nature writing, music history, biography, journalism, and memoir, River Music: An Atchafalaya Story eloquently celebrates the one-and-half-million watery acres that have shaped the lives of the people there--and been transformed by them in return. An epilogue written in the aftermath of the Deepwater Horizon explosion and the disastrous oil spill that followed provides a fitting and poignant coda to this memorable book.