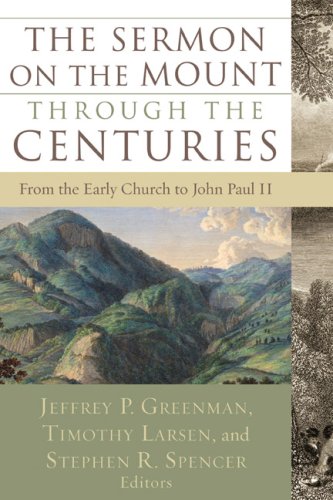 The Sermon on the Mount through the Centuries: From the Early Church to John Paul II

The Sermon on the Mount may well be the most controversial passage of Christian Scripture. John Chrysostom understood it as the foundational speech of the Christian politeia (citizenship) 'who are called to a philosophical life lived always within an eschatological horizon.' For Martin Luther it detailed how to live spiritually before God while participating in the world. John Calvin was prone to take a moderate stance on the Sermon's commands, while Dietrich Bonhoeffer and John Howard Yoder took Christ's words quite literally to heart-not as requirements but rather as a description of the life of a people gathered by and around Jesus. 'To be saved,' they believed, was 'to be so gathered.' An insightful survey of influential scholars and theologians, The Sermon on the Mount through the Centuries integrates church history, biblical exegesis, and theology, examining theological traditions and the historical, social, and political contexts they directly influenced. Some of the contributors include Robert Louis Wilken, David Lyle Jeffrey, Mark Noll, Stanley Hauerwas, and Margaret Mitchell, examining such varied figures as John Wesley, Geoffrey Chaucer, Augustine, Charles Spurgeon, Hugh of St. Victor, John Paul II, Dante, and more. While the diversity of the Christian tradition can be clearly delineated, much of the reflection offered in these chapters is complementary rather than competitive. Surely all would agree with John Yoder when he surmised (in regard to the Sermon) that 'the key to the obedience of God's people is not their effectiveness but their patience.'

Believers around the world and throughout time have relied on their knowledge of the Lord's Prayer, the Beatitudes, and the Golden Rule. The Sermon on the Mount through the Centuries offers illuminating insights into our identity in Christ as it is found in his most famous words. These enlightening essays will heighten the reader's relationship with Christ and make the founders of the faith wholly accessible today. Contributors include Stanley Hauerwas, David Lyle Jeffrey, Margaret M. Mitchell, Mark A. Noll, and Robert L. Wilken.

Title:: The Sermon on the Mount through the Centuries: From the Early Church to John Paul II

The Sermon on the Mount through the Centuries: From the Early Church to John Paul II