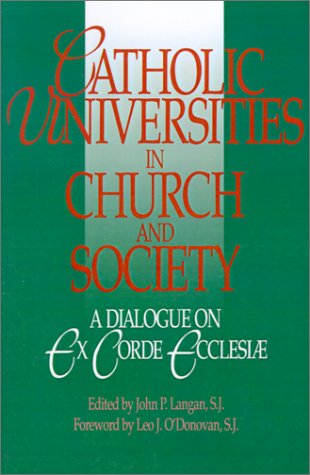 Catholic Universities in Church and Society: A Dialogue on Ex Corde Ecclesiae

The Roman Catholic Church's first significant legislative enactment on the nature and role of the Catholic university, the apostolic constitution Ex corde Ecclesiae (1990) grew out of thirty years of dialogue between ecclesiastical authorities and academic representatives. The final document affirms the explicit Catholic identity of Catholic educational institutions and outlines provisions for maintaining that identity; the questions of how to implement its provisions have in turn created the need for more dialogue and examination. In this volume, distinguished scholars and legal experts define the key questions and explore the future implications of Ex corde for American Catholic colleges and universities.

The assertion of the Catholic identity of Catholic institutions of higher education prompts the contributors to examine the definition of Catholic education as a special synthesis of the religious and the academic, of faith and reason; and to discuss corollary issues such as secularization; the counter-cultural features of Catholic education; and the great diversity of such schools in the United States and of their sponsoring religious orders. The contributors probe the schools' relationships with the Church hierarchy, exploring in particular the role of the bishops, the degree of autonomy from ecclesiastical control, and questions of academic freedom. They also consider specific legal issues that American Catholic colleges must face, including recognition of student groups, tenure and promotion decisions, governance, student and faculty conduct, and the relationship between canon and civil law, including compliance with national and local civil rights provisions. This volume also includes the complete text in English of Ex corde Ecclesiae and the preliminary draft of ordinances from the Ex corde Ecclesiae Implementation Committee of the National Conference of Catholic Bishops.

Appearing at a time when universities must face major issues of their own identity and governance, this volume will be of interest to all faculty and administrators, diocesan authorities and legal counsel, and everyone concerned with the future of Catholic higher education.

Title:: Catholic Universities in Church and Society: A Dialogue on Ex Corde Ecclesiae

Catholic Universities in Church and Society: A Dialogue on Ex Corde Ecclesiae