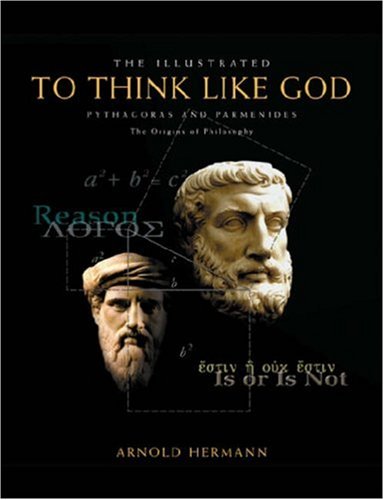 The Illustrated To Think Like God: Pythagoras and Parmenides, The Origins of Philosophy

Fascinating illustrations contribute to this illuminating and award-winning account of how and why philosophy emerged and make it a must-read for any inquisitive thinker unsatisfied with prevailing assumptions on this timely and highly relevant subject.

By taking the reader back to the Greek colonies of Southern Italy more than 500 years B.C., the author, with unparalleled insight, tells the story of the Pythagorean quest for otherwordly konwledge -- a tale of cultism, political conspiracies, and bloody uprisings that eventually culminate in tragic failure. The emerging hero is Parmenides, who introduces for the first time a technique for testing the truth of a statement that was not based on physical evidence or mortal sense-perception, but instead relied exclusively on the faculty we humans share with the gods: the ability to reason.
"Figures from Anaximander to Zeno, the ruins where they lived and thought, and the paradoxes and thought-experiments they proposed are depicted among the many] well-chosen color illustrations. The results read like an introductory textbook, but one that has been lovingly written, lavishly laid-out and crisply printed-- making it engaging enough to draw in readers to whom it has not been assigned." - Publishers Weekly "To Think Like God is a highly ambitious book . . . Hermann's approach deserves to be taken seriously as an alternative to standard interpretations." - Richard D. McKirahan, Jr., Edwin Clarence Norton Professor of Classics and Professor of Philosophy, Pomona College "Arnold Hermann brings fresh life into the specialists' debates . . . a blow of wind that dissipates much fog." - Walter Burkert, Professor Emeritus of Classical Philology, University of Zurich ARNOLD HERMANN is pursuing independent research on the origins of philosophy and methods of thinking. He specialices on subjects connected with Parmenides and Plato's Parmenides.

Title:: The Illustrated To Think Like God: Pythagoras and Parmenides, The Origins of Philosophy

The Illustrated To Think Like God: Pythagoras and Parmenides, The Origins of Philosophy