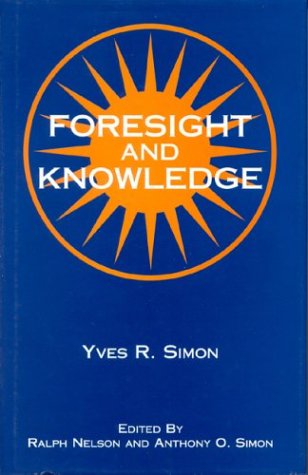 For Yves R. Simon, philosophy has an affinity to science, not in the sense that philosophy is a mere metascience, a commentary on the sciences, but rather because it shares the same aim as science: the search for explanation. The philosophy Simon espouses is philosophical realism which, following Jacques Maritain, he prefers to call critical realism. Against the prejudice that only some version of philosophical idealism, be it critical or absolute, is capable of understanding positive science. Simon, in Foresight and Knowledge, develops a philosophy of science form a realistic perspective. Philosophy of science or the critique of science, as it was known in France, is according to Simon, metahphysics in the exercise of its critical function.

Simon selects as the central focus of the treatise the problem of determinism, causality, and chance. Simon shows that the concept "determinism" must be understood in different conceptual systems, such as a philosophy of nature and physics; in the latter, determinism is conceived as a possibility of certain and exact prediction.