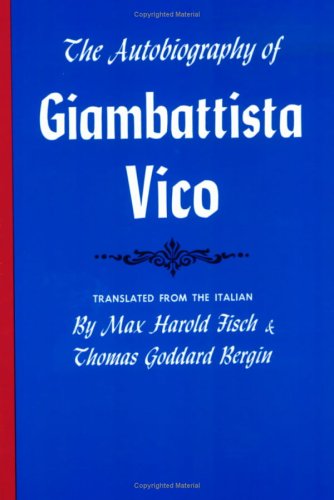 The Autobiography of Giambattista Vico is significant both as a source of insight into the influences on the eighteenth-century philosopher's intellectual development and as one of the earliest and most sophisticated examples of philosophical autobiography. Referring to himself in the third person, Vico records the course of his life and the influence that various thinkers had on the development of concepts central to his mature work. Beyond its relevance to the development of the New Science, the Autobiography is also of interest for the light it sheds on Italian culture in the seventeenth and eighteenth centuries.

Still regarded by many as the best English-language translation of this classic work, the Cornell edition was widely lauded when first published in 1944. Wrote the Saturday Review of Literature "Here was something new in the art of self-revelation. Vico wrote of his childhood, the psychological influences to which he was subjected, the social conditions under which he grew up and received an education and evolved his own way of thinking. It was so outstanding a piece of work that it was held up as a model, which it still is."