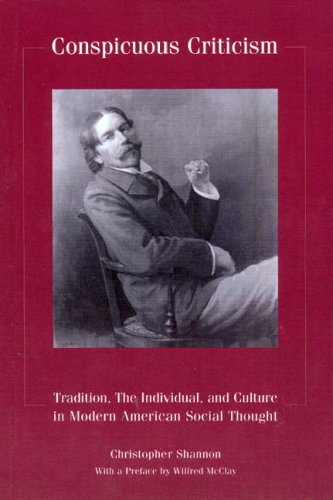 We can recommend this book, and highly. Its bulk is taken up by an analysis of the main lines of American social sciences in the century past, a narrative shaped by theorists such as Thorstein Veblen (A Theory of the Leisure Class), Robert and Helen Lynd (Middletown), John Dewey, and C. Wright Mills (The Power Elite). You may be only obliquely familiar with these thinkers as sources cited in footnotes and bibliographies, but be patient: Shannon carefully reads them as part of the ongoing modern project positing a theory of culture and human goods based on Enlightenment assumptions, of reason cut free from pre-modern forms of tradition. By the end of the period under discussion, about 1960 (C. Wright Mills was already naming it 'post-modern') social theorists seemed to be suffocating in a fecund but chaotic mass of theory and counter-theory. Here Shannon steps in with his own proposition, and makes explicit his own Roman Catholic convictions and the influence of Christopher Lasch and Hannah Arendt: the only way out of chaos is to speak of a return to a traditional understanding of human cultures as dependent upon a transcendent, divine order that gives nature meaning and that 'humbly' admits a dimension of necessity, to a modern American culture that exalts unlimited freedom and rejects constraint. I promise: a book that begins as tough sledding concludes with unmistakable clarity (Books and Culture reviewer Eric Miller calls it 'brave') outlining an important and compelling prescription for authentic cultural renewal.

Originally published in 1996 and newly revised, "Conspicuous Criticism" is a ringing defense of the need for religion and tradition in contemporary society. Writing with moral passion and critical verve, Christopher Shannon offers a convincing indictment of the forces that isolate the individual in modern capitalist society andcounters more than a century of efforts by modern intellectuals to displace tradition in favor of a humanism that actually diminishes humanity in the name of freeing its potential. Featuring in-depth analyses of the works of John Dewey, Thorstein Veblen, C. Wright Mills, and others, "Conspicuous Criticism" is a call to reinstate traditional relations to God, nature, and the common good. Scholars in fields from American studies to intellectual history will be forced to grapple with Shannon s trenchant critique, which is well on its way to becoming a classic of Christian thought.
"Conspicuous Criticism" inspired a concern about the modern world that in the years since I ve not been able to brush aside. Eric Miller, "First Things
""

Publisher: University of Chicago Press: May 2006