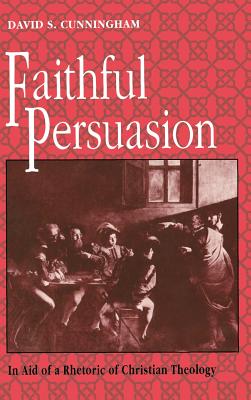 Faithful Persuasion: In Aid of a Rhetoric of Christian Theology

David Cunningham believes Christianity places itself at a disadvantage. Though much of Christian theological discourse speaks from an obviously confrontational posture, few of its theologians are willing to admit that theology is comprised of arguments. Far from absolute, Christian theology is, in the words of Cunningham (brace yourself here), ''a fragile and uncertain endeavor. Its claims can only be tentative, and the truth of its assertions are known only to God.'' Theology speaks about what seems to be true, and Cunningham believes it does this best by following the negative way. Just as we can act on what cannot be fully known, so can we speak. Cunningham seeks to reintroduce rhetoric to Christian theology, reminding us that the New Testament, patristic and Reformation eras all employed skill in rhetoric to great effect. He divides his book into five sections -- theoria, pathos, ethos, logos and praxis -- skillfully developing his own argument that we must recover a sense of our audience, the character with which we should speak and the word itself to be spoken. Cunningham concludes with a return to via negativa, reminding us that ''the theological task is a yearning for truth,'' but not truth itself. All statements must be submitted to the mystery of the triune God as we simultaneously seek to faithfully persuade others to worship Father, Son and Holy Spirit.

Over the past twenty years, scholars in a wide variety of academic disciplines have been giving increasing attention to rhetoric - the study of persuasive argument. In Faithful Persuasion David S. Cunningham offers the contemporary era's first sustained account of the relationship between rhetoric and Christian theology. Cunningham argues that Christian thinkers should abandon their attempts to codify argumentation within the canons of formal logic and suggests that they should instead come to a more organic understanding of the process of persuasion. This rhetorical approach to theology can cast new light on longstanding theological controversies and establish a new agenda for the study of the methods, sources, and norms of Christian theology. Drawing chiefly upon the rhetorical insights of Aristotle, and on the reappropriation of Aristotle's views by numerous modern rhetoricians - ranging from John Henry Newman to Kenneth Burke and Chaim Perelman - Cunningham establishes a firm foundation from which to support his central assertion that "Christian theology can best be understood as a form of persuasive argument." In addition, he explores the implications of a rhetorical method for studies in doctrinal formulation, biblical exegesis, and church history. Written for theologians, clergy members, and laypeople with a strong interest in theology, this book will introduce readers to the richness of the rhetorical tradition and its important implications for the discipline of Christian theology.

Title:: Faithful Persuasion: In Aid of a Rhetoric of Christian Theology

Faithful Persuasion: In Aid of a Rhetoric of Christian Theology