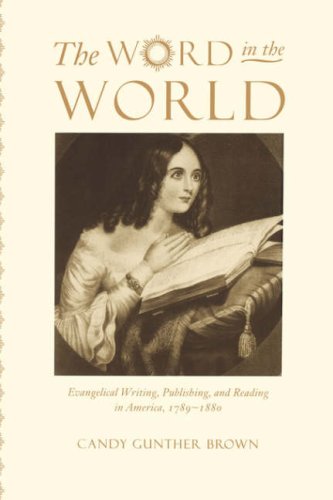 The Word in the World: Evangelical Writing, Publishing, and Reading in America, 1789-1880

Is the ''evangelical print culture'' of the nineteenth century worthy of an entire volume? As Candy Gunther Brown, a professor of American studies at St. Louis University, puts it, ''The Word became incarnate in American culture by the 1850s as publishers demonstrated its relevance to diverse cultural settings, ranging from the refined Victorian parlor to the rough-hewn frontier farm.'' She argues that historians of this period have too easily overlooked this ''theology of commercialization'' by assuming nineteenth-century evangelicals were more interested in packaging than content. Creating an evangelical canon became the Protestant way of navigating the tension of their two-fold aim: purity (keeping the sacred uncontaminated by the profane) and presence (infusing the world with sanctifying influence). Brown chooses not to examine the question of whether ''evangelicals were correct in asserting God authored all meaning,'' focusing instead on how evangelical writing, publishing and reading affected both culture and participant. Her conclusion that this era was a defining one in disseminating the Protestant doctrine of the priesthood of all believers is fascinating to consider, and as far as we know, unique. Considering that in recent years Christian titles have occupied top slots on national best-seller lists, Brown's final question is of immediate relevance: ''Will twenty-first-century religious uses of the media balance purity and presence or instead flow toward one or another extreme?'' 336 pp. Multiple copies available.

The recent success of the Left Behind book series, which sold over 50 million books, points to an enormous readership of evangelical Christian literature that has not gone unnoticed by the mainstream publishing world. But this is not a recent phenomenon; the evangelical publishing community has been growing for more than two hundred years. Candy Gunther Brown explores the roots of this far-flung conglomeration of writers, publishers, and readers, from the founding of the Methodist Book Concern in 1789 to the 1880 publication of the runaway best-seller Ben-Hur. Brown shows how this distinct print community used the Word of the Bible and printed words of their own to pursue a paradoxical mission: purity from and a transformative presence in the secular world.
Although scholars usually claim that religious publishing fell prey to the secularizing engines of commodification, Brown argues that evangelicals knew what they were doing by adopting a range of strategies, including the use of popular narratives and beautiful packaging. An informal canon of texts emerged in the nineteenth century, consisting of sermons, histories, memoirs, novels, gift books, Sunday school libraries, periodicals, and hymnals.
Looking beyond the uses of texts in religious conversion, Brown examines how textual practices have transmitted cultural values both within evangelical communities and across a larger American cultural milieu. An epilogue conveys crucial insights into twenty-first-century ties between religion and the media.

Title:: The Word in the World: Evangelical Writing, Publishing, and Reading in America, 1789-1880

The Word in the World: Evangelical Writing, Publishing, and Reading in America, 1789-1880