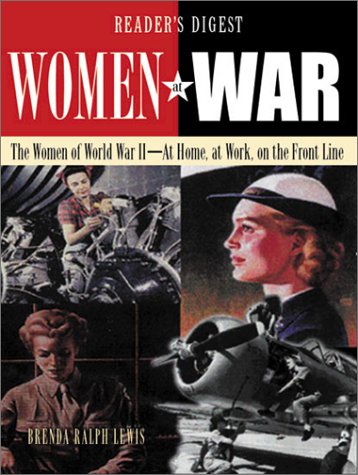 Women at War: The Women in World War II, at Home, at Work, on the Front Line

New condition, inside and out, but for previous owner's stamp inside front cover beneath jacket flap.

Staggering in scale and impact, World War II called vast numbers of men to fight for their country and left behind huge vacuums -- in the family, the workplace and society at large. Written with profound insight and admiration, "Women at War" celebrates the wives, mothers, sisters and daughters who bravely stepped into the breach and explores how their experiences changed lives ever after for both sexes.

Heartfelt personal stories and evocative period photography dramatically capture the sacrifices and remarkable achievements of women of rare courage -- for both the allied and axis countries.

Among the many unsung heroines of World War II, readers will meet:
-- Women at home, coping with air raids, rationing and loneliness, taking in refugees and growing in resourcefulness and independence
-- Women in industry, acquiring technical skills and mastering feats of manual labor traditionally performed by men only
-- Women in service, both public and military, from fire brigades to catering corps to the privileged ranks of female pilots
-- Women in espionage, manning anti-aircraft floodlights, plotting war plans, breaking codes and uncovering the secrets of enemy intelligence

Title:: Women at War: The Women in World War II, at Home, at Work, on the Front Line

Women at War: The Women in World War II, at Home, at Work, on the Front Line