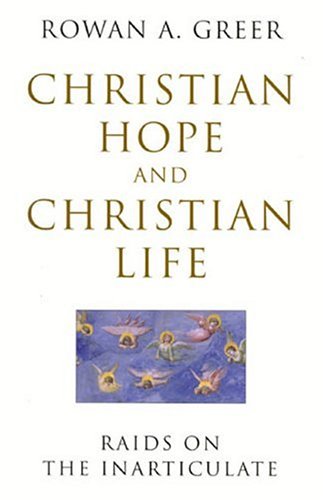 Christian Hope and Christian Life: Raids on the Inarticulate

Lest the Christian hope succumb to, as Nietzsche put it, ''the rainbow-bridge of concepts'' on which ''one must be very light, very subtle, very thin to step across,'' Rowan Greer sets out to ''raid the inarticulate'' (T.S. Eliot's words) -- to locate hope's continuity and discontinuity with our present existence through the writings of Gregory of Nyssa, Augustine, John Donne, and Jeremy Taylor. Why these writers? Greer hypothesizes that though we have entered a postcritical phase of Christian theology, our thinking can still be informed by the traditional approaches taken by these four in interpreting and living the New Testament promise of salvation. Two distinct sensibilities emerge. For Gregory of Nyssa and Jeremy Taylor, Christian hope is an eternal reality in which we participate now, though its fruition is solidly placed in the age to come. For Augustine and John Donne, the Christian life is anticipatory -- a steady movement toward ultimate things gathered in ''a future beyond all futures.'' But Greer refuses to pick favorites. His thesis centers on the paradox that only the ''there and then'' can illuminate the ''here and now.'' Hope itself, as a reality, is fraught with difficulty. Hope calls us to ask questions that reveal our world in all its ambiguity, frailty and flux. It shows us both tragedy and the powerful energy of creativity. It has no easy conclusion, but ultimately it exhorts us (in Eliot's words again) to ''be still and still moving / Into another intensity / For a further union, a deeper communion...' 282 pp.

What is the destiny of the human soul in this life and the next? Dare we hope to see God face to face, or will our vision of God remain forever filtered through a glass, darkly ? In this remarkable volume, Rowan A. Greer turns to the New Testament, the church fathers, and later writers to throw light on their own visions of the human soul. He suggests that Augustine of Hippo and Gregory of Nyssa represent two distinct strands of Christian thinking that find expression later in writers such as John Donne and Jeremy Taylor. Greer, who has trained two generations of historians and theologians in the rich thought of the early church, has succeeded in writing a volume that is both full of original scholarly insight and, by virtue of his elegant writing, accessible to laypeople and non-specialists."

Title:: Christian Hope and Christian Life: Raids on the Inarticulate

Christian Hope and Christian Life: Raids on the Inarticulate