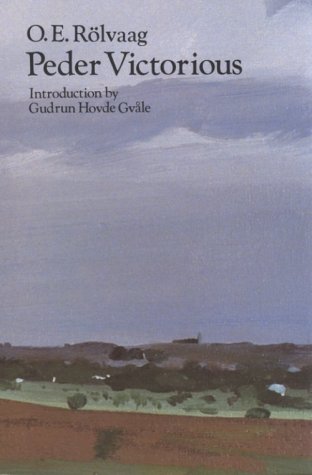 Peder Victorious : A Tale of the Pioneers Twenty Years Later

Peder Victorious, the sequel to Rolvaag's massive Giants in the Earth, continues the saga of the Norwegian settlers in the Dakotas. Here again, years later, are all the sturdy pioneers of the earlier novel, Rolvaag's "vikings of the prairie"--Per Hansa's Beret and their children, Syvert Tonseten and Kjersti, and Sorine. The great struggle against the land itself has been won. Now there is to be a second struggle, a struggle to adapt, to become Americans.The development of the Spring Creek settlement in these years is manifested in the rebellious growing up of Peder Victorious. Peder is a beautiful and moving novel of youth and youth's self-discovery. It is the story, too, of Beret's pain and dismay at the Americanization of her children, what Rolvaag described as the true tragedy of the immigrants, who made their children part of a world to which they themselves could never belong.Out of the inevitable conflict between the first-generation American and his still Norwegian mother, Rolvaag built a powerful novel of personal growth, guilt, and victory.

Peder Victorious : A Tale of the Pioneers Twenty Years Later