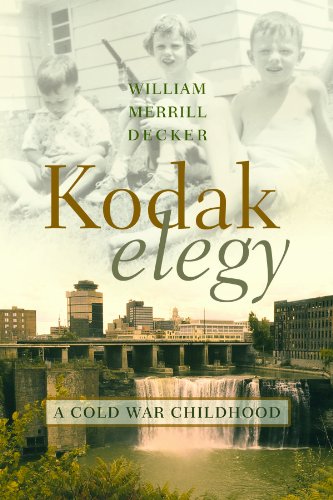 A new copy, right out of its shrinkwrap, but cover corners have been slightly bumped.

What was it like to grow up as the son of a Kodak engineer during the company s glory days? Decker presents a vivid portrait of life in the Rochester suburbs where residents eagerly conformed to period expectations: two kids, two cars, a move from a snug middle-class neighborhood to a spacious upper-middle-class subdivision. In recollecting the blithe and troubled scenes of America s postwar prosperity, Decker evokes a bygone era with rich detail and biting clarity. Depicting the banalities of the place and time, Kodak Elegy narrates a political education shaped by the Civil Rights Movement, John F. Kennedy s assassination, the Vietnam War, and the constant threat of nuclear exchange. Concerned throughout with the destructive forces masked by American affluence and idealism, Decker closes with a meditation on the 1995 Oklahoma City bombing, a crime perpetrated by a Western New Yorker in the state where the author has long made his home.

Chronicling the late fifties through early seventies, Kodak Elegy delves into the stories of aging relatives and neighborhood life in the old city core. The author traces his family connections with the Hudson Valley s Dutch settlements and Rochester s German-American immigrant community, the force behind the area s horticultural renown. He highlights his family s ties with Eastman Kodak, the source of Rochester s twentieth-century wealth and civic pride. In the vein of American Beauty and Revolutionary Road, Decker mines the landscape of his suburban upbringing and uncovers the thwarted dreams of family and friends, recovering in the process his dream of escape as well as his own residual attachment to the utopian vision of the "Kodak Moment.""