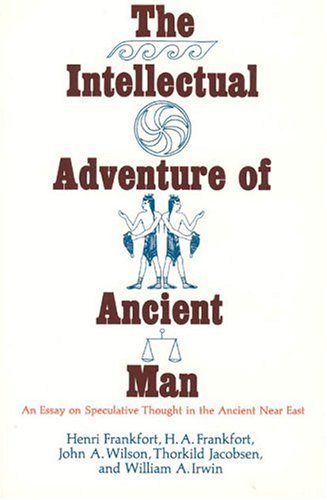 Intellectual Adventure of Ancient Man : An Essay on Speculative Thought in the Ancient Near East

The people in ancient times the phenomenal world was teeming with life; the thunderclap, the sudden shadow, the unknown and eerie clearing in the wood, all were living things. This unabridged edition traces the fascinating history of thought from the pre-scientific, personal concept of a "humanized" world to the achievement of detached intellectual reasoning.

The authors describe and analyze the spiritual life of three ancient civilizations: the Egyptians, whose thinking was profoundly influenced by the daily rebirth of the sun and the annual rebirth of the Nile; the Mesopotamians, who believed the stars, moon, and stones were all citizens of a cosmic state; and the Hebrews, who transcended prevailing mythopoeic thought with their cosmogony of the will of God. In the concluding chapter the Frankforts show that the Greeks, with their intellectual courage, were the first culture to discover a realm of speculative thought in which myth was overcome.

Title:: Intellectual Adventure of Ancient Man : An Essay on Speculative Thought in the Ancient Near East

Intellectual Adventure of Ancient Man : An Essay on Speculative Thought in the Ancient Near East