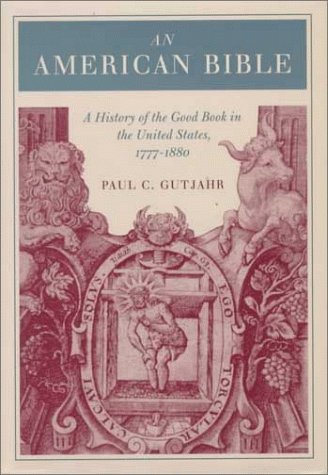 New with some wear and tear to dustjacket.

"An American Bible is an extremely compelling piece of cultural history that succeeds in making rich rather than schematic sense of the major dramas that lay behind the production of over 1,700 different American editions of the Bible in the century after the American Revolution. Gutjahr's book is especially powerful in demonstrating how nineteenth-century efforts to purge the Bible of textual and translational impurities in search of an 'authentic' text led ironically to the emergence of entirely new gospels like the Book of Mormon and the massive fictionalized literature dealing with the life of Christ."

During the first three-quarters of the nineteenth century, American publishing experienced unprecedented, exponential growth. An emerging market economy, widespread religious revival, educational reforms, and innovations in print technology worked together to create a culture increasingly formed and framed by the power of print. At the center of this new culture was the Bible, the book that has been called "the best seller" in American publishing history. Yet it is important to realize that the Bible in America was not a simple, uniform entity. First printed in the United States during the American Revolution, the Bible underwent many revisions, translations, and changes in format as different editors and publishers appropriated it to meet a wide range of changing ideological and economic demands.

This book examines how many different constituencies (both secular and religious) fought to keep the Bible the preeminent text in the United States as the country's print marketplace experienced explosive growth. The author shows how these heated battles had profound consequences for many American cultural practices and forms of printed material. By exploring how publishers, clergymen, politicians, educators, and lay persons met the threat that new printed material posed to the dominance of the Bible by changing both its form and its contents, the author reveals the causes and consequences of mutating God's supposedly immutable Word.