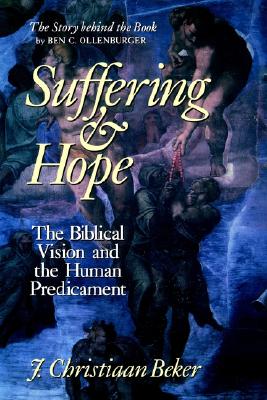 Suffering and Hope: The Biblical Vision and the Human Predicament

This compelling study by J. Christiaan Beker provides a moving, triumphant answer to one of life's greatest mysteries - the presence of suffering in God's world. Now an established classic in the discussion of the problem of evil, Suffering and Hope plumbs the Old Testament's response to earthly pain as well as Paul's own dealings with 'redemptive suffering.' Beker seeks to understand how the Bible's view of suffering relates to our present experience of suffering and to the Christian hope for the future creation. His concern is with the quality and character of bothe suffering and hope in a world where the question of suffering is inescapable. This powerful new edition features a foreword by Ben C. Ollenburger that describes the story behind the book - the dehumanizing conditions Beker endured as a slave laborer during the Nazi occupation of the Netherlands and the ways in which they helped shape the particular poignancy of his view of suffering. Readers will be moved both by Beker's personal transparency and by his biblical vision of 'hopeful suffering' - the apocalyptic trust in God's eventual victory over the power of death that poisons his creation.

Title:: Suffering and Hope: The Biblical Vision and the Human Predicament

Suffering and Hope: The Biblical Vision and the Human Predicament