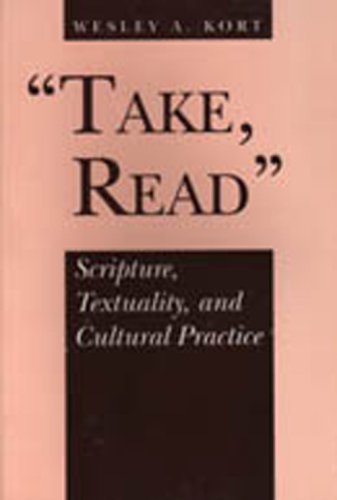 By: WESLEY A. KORT

This book deals with the role of the category of "scripture" within adequate theories of textuality and culture. Wesley Kort is interested in the practice of reading a text as though it were scripture. Beginning with John Calvin's theory of reading, Kort shows that the theory and practice of reading as detailed by Calvin are applied to other texts that begin to be read as scripture and eventually, in the modern period, replace the reading of the Bible as scripture. These alternative texts are, beginning in the sixteenth century, nature, then, in the early eighteenth century, history, and, at the beginning of the nineteenth century, literature.

Kort argues that what we take as modernity is based on a practice of reading, not in what it means to read, but in what texts are read as scripture. He argues that the postmodernist attempt not to read anything at all as scripture is an illusion that the theories of reading of Maurice Blanchot and Julia Kristeva expose. In conclusion, Kort raises the question of what it might mean today to again read the Bible as though it were scripture, that is, to read the Bible with practices indicated by Blanchot and Kristeva.