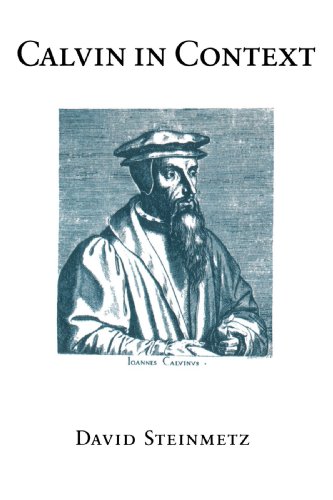 In this illuminating study, David C. Steinmetz places Calvin's thought in the context of the theological and exegetical traditions - ancient, medieval, and early modern - that shaped it.

Steinmetz does not limit discussion of Calvin's thought to his undeniably important handbook to theology, the much revised Institutes of the Christian Religion. Instead, he opens up a broader context by examining works less frequently cited, particularly Calvin's commentaries, classical studies, and polemical treatises. Steinmetz grapples with Calvin's views on a wide range of contested issues, including the natural knowledge of God, the problem of iconoclasm, the doctrines of justification and predestination, and the role of the state. Steinmetz also clarifies Calvin's quarrels with Lutherans, Catholics, and Radicals. Yet this book does not reduce Calvin's contribution to his usefulness as a resource for contemporary theological debates. The Calvin who emerges in these pages is a sixteenth-century figure, both strangely foreign and uncannily familiar, a man who frequently engages his enemies and sometimes even corrects his friends, but is never mute, never dull, and always stylistically elegant. An accessible yet authoritative introduction to the mind of the historical Calvin, Calvin in Context provides a framework for understanding Calvin from his own writings and the writings of his contemporaries. This edition features a revised preface and six new chapters.