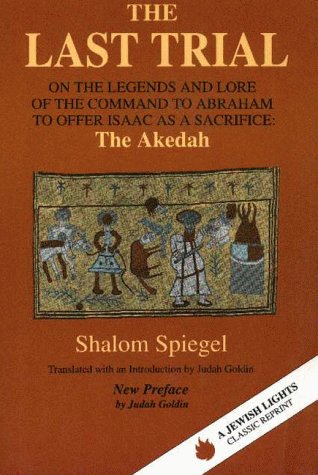 The Last Trial: On the Legends and Lore of the Command to Abraham to Offer Isaac as a Sacrifice : The Akedah 1899-1984 (Jewish Lights Classic Reprint)

Slain by Abraham, Isaac is resurrected by the angel; the ram that took Isaac's place was created on the Sabbath; God is not testing Abraham's faith but punishing him for rejecting Ishmael. Variations and details such as these were woven into the Genesis text by centuries of Talmudic lore and rabbinic commentary. In this classic work, Spiegel explores the rich traditions surrounding the Akedah (binding of Isaac) from the earliest Jewish legends through the Middle Ages. He traces the story's echoes of ancient sacrificial rites--both animal and human--into the archaic past and demonstrates its influence on various Old Covenant rituals that followed: Isaac's near-sacrifice prefigures the Passover, the ram's horn becomes the shofur that announces the New Year. The Akedah served as a perennial touchstone for collective memory, summoned up as each generation faced trials and persecutions (Antiochus, the Crusades) and spurring Jewish (and later Christian and Islamic) meditations on atonement, divine justice, and mercy. Passages such as these expand around the biblical text like concentric ripples in a pool of water: 'Both of them brought the stones, both of them brought the fire, both of them brought the wood;' 'Abraham was like to a man who builds a wedding house for his son, and Isaac was like to man getting ready for the wedding feast, which he does with joy.'

"We find that the story of Abraham and Isaac rises almost spontaneously in the mind of one generation after another.... Constantly past and present react to and upon each other, and life is given an order, a coherence, by the themes which govern the Holy Scriptures and the reinterpretations of those themes."
--from the Introduction by Judah Goldin

Shalom Spiegel's classic examines the total body of texts, legends, and traditions referring to the Binding of Isaac and weaves them together into a definitive study of the Akedah as one of the central events in all of human history.

Spiegel here provides the model for showing how legend and history interact, how the past may be made comprehensible by present events, and how the present may be understood as a renewal of revelation.

Title:: The Last Trial: On the Legends and Lore of the Command to Abraham to Offer Isaac as a Sacrifice : The Akedah 1899-1984 (Jewish Lights Classic Reprint)

The Last Trial: On the Legends and Lore of the Command to Abraham to Offer Isaac as a Sacrifice : The Akedah 1899-1984 (Jewish Lights Classic Reprint)