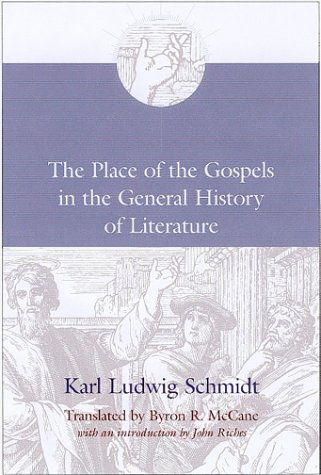 The Place of the Gospels in the General History of Literature

KARL LUDWIG SCHMIDT'S classic Die Stellung der Evangelien der allgemeinen Literaturgeschichte was one of a handful of twentieth-century essays on the New Testament to set the agenda for an entire generation of New Testament scholars. First published in 1923, the text laid out Schmidt's contention that the gospels represent a literary genre that does not derive from others in the ancient world. In portraying the gospels as the written record of an oral tradition rather than as biographical or historical text, the German scholar's powerful argument has commanded attention in Germany for decades. With this translation, Byron R. McCane enables a new generation of English-speaking scholars to engage with Schmidt's classic perspective on an enduring question. In an introduction to the volume, John Riches locates the text among the writings of the form critics, with whom Schmidt allied himself, and relates it to Schmidt's own still untranslated study of the topography and chronology of the gospels. Riches also explores how recent efforts to classify the gospels as ancient biographies have in many ways misread and misrepresented Schmidt's views.

Title:: The Place of the Gospels in the General History of Literature

The Place of the Gospels in the General History of Literature