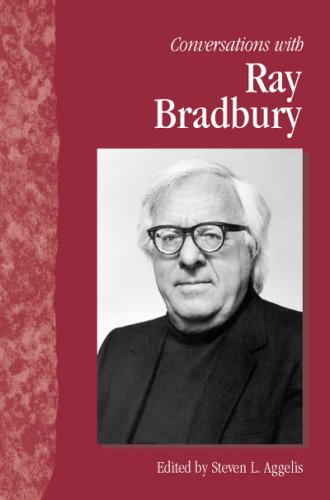 This collection of interviews captures the imagination of the writer widely regarded as "the granddaddy of science fiction." However, Ray Bradbury considers Fahrenheit 451 to be his only science-fiction novel and his others, including The Martian Chronicles, Something Wicked This Way Comes, and The Illustrated Man, to be more fantasy and horror than science fiction.

Bradbury, born in 1920, began reading voraciously quite early. He enjoyed the pulp magazine Amazing Stories when it first appeared. He came to maturity just before World War II, when Nazis were firing V-1 and V-2 rockets at Britain, and began writing fiction as the space age was coming to full stride. In addition to having a moon crater named in his honor, he has received science fiction's Nebula Grandmaster Award for his lifetime achievements and in 2000 the National Book Foundation's Medal for Distinguished Contribution to American Letters.

"The writer's vocabulary need not be extensive," Bradbury says. "He shouldn't throw unusual words at the reader, but I do believe in using the right word. The reader should be given something more than the basic meaning by the use of words that are dynamic and colorful, that provide pictures for the reader."

Since 1941, when Super Science Stories bought his first story, Bradbury has written and published hundreds of short stories, as well as novels, essays, dramas, operas, teleplays, poems, and screenplays. His film work in Ireland crafting the screenplay for John Huston's Moby-Dick in 1954 established Bradbury as a fixture in Hollywood. Versions of his works have been shown on all the major networks, and USA Network produced sixty-five of his teleplays for The Ray Bradbury Theater.

During his career Bradbury has given more than 300 interviews. The selection included in this volume begins in 1948, spans more than five decades, and charts Bradbury's long creative life.