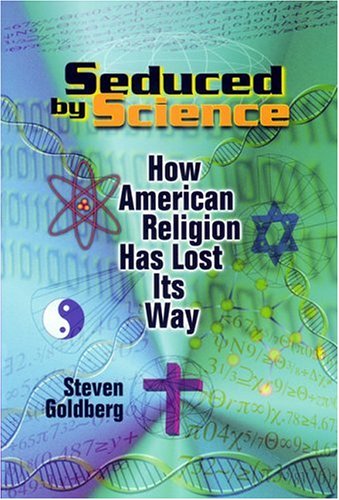 Seduced by Science: How American Religion Has Lost Its Way

American religion, Steven Goldberg claims, has fallen into a trap. Just at the moment when it has amassed the political strength and won the legal right to participate effectively in public debate, it has lost its distinctive voice. Instead of speaking of human values, goals, and limits, it speaks in the language of science.

In the United States, science has extraordinary influence and respect. American religious leaders seeking prestige for their point of view regularly couch their responses to technological developments, or defend their faith, in scientific terms. They claim, for instance, that medical studies demonstrate the power of prayer, that science validates the Bible, including its account of creation, and that patenting the genetic code is dangerous because genes are the essence of who we are.

But when ministers, priests, and rabbis expound on double-blind studies and the genetic causes of behavior, they do not elevate religion, Goldberg maintains, they trivialize it. Seduced by Science examines how, by allowing scientific discourse to set the terms of the debate, American religious leaders facilitate religion's move away from its more appropriate and important concerns of values, morality, and humility. Science can tell us a lot about what is but precious little about what ought to be and our religious leaders often miss the chance to add an important voice from a faith-based perspective to the public debate that follows scientific advances.

Discussing the most recent and pressing collisions between science and religion-such as the medicinal benefits of prayer, the human genome project, and cloning-Goldberg raises the timely question of what the appropriate role of religion might be in public life today. Tackling the legal aspects of religious debate, Goldberg suggests ways that religious leaders might confront new scientific developments in a more meaningful fashion.

Title:: Seduced by Science: How American Religion Has Lost Its Way

Seduced by Science: How American Religion Has Lost Its Way