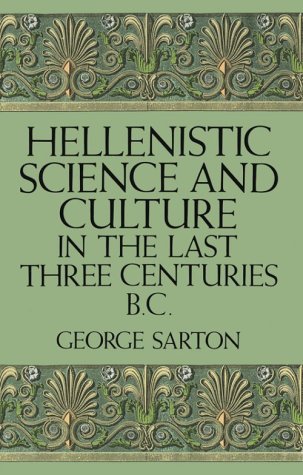 Hellenistic Science and Culture in the Last Three Centuries BC

Often considered the founder of the modern study of the history of science, Sarton (d. 1956) in these essays reflects on the indissoluble bond that connects science and the humanities. ''Each scientific result,'' writes Sarton, ''is a fruit of humanity, a proof of its virtue. The almost inconceivable immensity of the universe revealed by his own efforts does not dwarf man except in a purely physical way; it gives a deeper meaning to his life and thought...here are no natural sciences as opposed to humanities; every branch of science or learning is just as natural or humane as you make it.''

"No historian of science equaled him in knowledge, breadth and enthusiasm, none saw the subject whole as he did, and none did so much to promote the study." -- Scientific American.
In the centuries immediately preceding the birth of Christ, geometry, astronomy, physics, anatomy, mathematics, grammar and other disciplines flowered in a nurturing matrix of Greek rationalism mixed with fructifying elements from Egyptian, Jewish, Persian, Syrian, Indian, African and other cultures. The result was one of the most fertile and influential periods in Western intellectual history. In this monumental study, a noted scholar focuses on this era, painting a broad picture that emphasizes science but also includes ancient arts and letters, since as Professor Sarton notes, "We could never understand Hellenistic culture without their gracious presence."
The book is divided into two parts: Part One deals with the third century B.C. As the empire of Alexander the Great disintegrated, a Greek intellectual hegemony evolved, grounded in the work of Ptolemy and Euclid, Aristarchos and Archimedes, Eratosthenes and other thinkers. Ranging widely across the spectrum of Hellenistic accomplishment, Dr. Sarton outlines advances in geography and chronology, physics, technology, anatomy, medicine, philosophy and religion, language and more.
Part Two takes up the last two centuries before the Christian era. Beginning with the social background of the Hellenistic world, the author illuminates the relationship between Greek religion and Hebrew scripture, the development of Athenian schools of philosophy, and the astronomical theories of Hipparchos, as well as documenting advances in mathematics, physics and technology, natural history, medicine, geography, philology, art, and literature.
Writing with exceptional acumen and erudition, Dr. Sarton, one of the world's foremost authorities on the history of science, develops a stimulating and vibrant picture of the beginnings of Western science and culture, and demonstrates how the achievements of three extraordinary centuries have echoed down the ages.

Title:: Hellenistic Science and Culture in the Last Three Centuries BC

Hellenistic Science and Culture in the Last Three Centuries BC