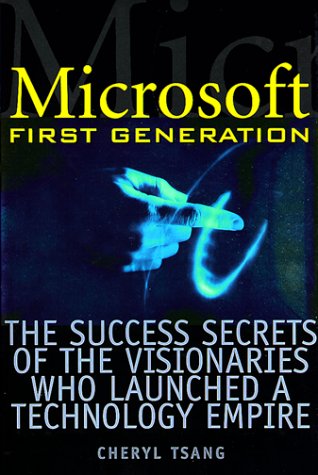 Microsoft First Generation: The Success Secrets of the Visionaries Who Launched a Technology Empire

What began as a modest start-up partnership only twenty-five years ago has already surpassed all the giants of contemporary capitalism, including General Electric and IBM, and has achieved a value estimated at nearly $500 billion. How did Microsoft achieve all of this in so short a time? What was the true nature of the Microsoft environment in the beginning, and what are the secrets behind its triumph?

Find the answers here. With \IMicrosoft First Generation\N, Cheryl Tsang skillfully renders recent history in bold, colorful strokes, highlighting each of the specific business qualities and entrepreneurial traits that turned Microsoft's dreams into reality. Meet the early builders of Microsoft, and step inside the famous culture of loyalty, the storied "maniacal work ethic," and the hardcore world of reckless risk-taking that remains so integral to the computer giant's matchless and ongoing success.

Here, up close and personal, Tsang introduces readers to twelve members of Microsoft's mythic first generation, each of whom has walked away from Microsoft as a multimillionaire. The collection spans a diverse collection of creative geniuses and business wizards, from Bob O'Rear, employee number seven, who joined the team in 1977 and wrote the original MS-DOS program on the first IBM PC; to bestselling author Russell Borland who, after innocently answering a help wanted ad for a technical copywriter in 1980, suddenly became the mouthpiece of an entire company, singlehandedly familiarizing the world with Microsoft products; to Trish Millines, who began as a software tester in 1988 and then blazed a trail and effected lasting change as a powerful advocate for ethnic diversity in the technological arena.

Featuring candid appraisals of the idiosyncrasies of software culture, fascinating portraits of the enigmatic Bill Gates, and rare photographs of the company's early days, \IMicrosoft First Generation\N uncovers a range of surprising success secrets-and reveals, once and for all, exactly what makes Microsoft tick.

Title:: Microsoft First Generation: The Success Secrets of the Visionaries Who Launched a Technology Empire

Microsoft First Generation: The Success Secrets of the Visionaries Who Launched a Technology Empire