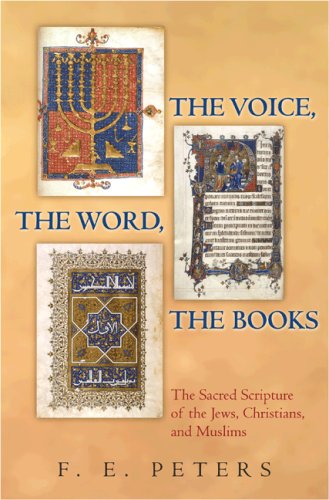 The Voice, the Word, the Books: The Sacred Scripture of the Jews, Christians, and Muslims

Jews, Christians, and Muslims all believe that their Scriptures preserve God's words to humanity, and that those words were spoken uniquely to them. In The Voice, the Word, the Books, F. E. Peters leads readers on an extraordinary journey through centuries of written tradition to uncover the human fingerprints on the Hebrew Bible, the New Testament, and the Quran, sacred texts that have enriched millions of lives.

Bringing the latest Biblical and Quranic scholarship to a general audience, Peters explains how these three powerfully influential books passed from God's mouth, so to speak, to become the Scriptures that we possess today. He reveals new insights into their origins, contents, canonization, and the important roles they have played in the lives of their communities. He explores how they evolved through time from oral to written texts, who composed them and who wrote them, as well as the theological commonalities and points of disagreement among their adherents. Writing in the comparative style for which he is renowned, Peters charts the transmission of faith from the spoken word to the printed page, from the revelations on Sinai and Mount Hira to Mamluk ateliers in Cairo and Gutenberg's press in Mainz.

Peters is an acknowledged expert who has written extensively on these three great world religions, each of them an inheritor of the faith of Abraham. Published in conjunction with an exhibit at the British Library, this illustrated book includes beautiful images of the rare editions on exhibit and constitutes Peters's most ambitious and illuminating examination yet of the sacred texts that so inform civilization both East and West.

Title:: The Voice, the Word, the Books: The Sacred Scripture of the Jews, Christians, and Muslims

The Voice, the Word, the Books: The Sacred Scripture of the Jews, Christians, and Muslims