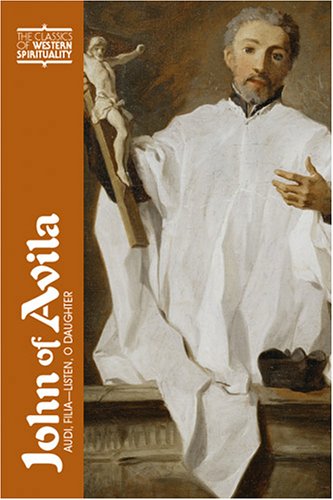 John of Avila: Audi, Filia (The Classics of Western Spirituality)

John of Avila (1499-1569) was a major figure in the ecclesial reform and spiritual renewal that finally came to pass in 16th-century Spain. In spite of discrimination because of his Jewish background, John had an excellent education at the Universities of Salamanca and Alcala, centers of Christian humanistic studies in Spain. As a diocesan priest in Andalusia, he labored as a preacher, confessor, spiritual director, catechist, evangelist, educator, and theologian. He knew and helped many saints including Ignatius of Loyola, Teresa of Avila, and John of God. Master Avila, as he was called, centered his efforts on the establishment of colleges and universities for the education of laity and priests and on reform of the priesthood. He also directed many religious and lay people. His spiritual masterpiece, the Audi, filia, is a guide to the spiritual life in which hearing the word of God in the Scriptures and contemplating the face of Christ, especially in his passion, leads to personal transformation in the communion of the Father and the Son. In many ways the book reflects the time in which it was written, but it also transcends it to provide direction for a faithful and mature Christian life in any age.

John of Avila: Audi, Filia (The Classics of Western Spirituality)