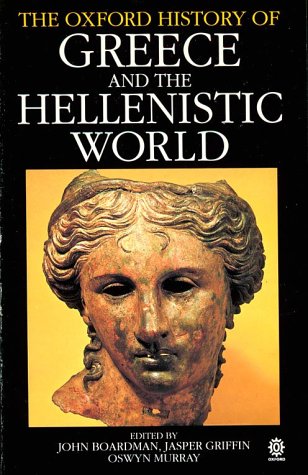 The Oxford History of Greece and the Hellenistic World

From the epic poems of Homer through the glittering art and architecture of Greece's Golden Age to the influential Roman systems of law and leadership, the classical world established the foundations of our culture as well as many of its most enduring achievements. Now available in a smaller, more convenient format, the astonishingly in-depth and widely praised Oxford History of the Classical World offers the general reader the definitive companion to the Graeco-Roman world.
The first volume, Classical Greece and the Hellenistic World, covers the period from the eighth to the first centuries B.C., a period unparalleled in history for its brilliance in literature, philosophy, and the visual arts. It also treats the Hellenization of the Middle East by the monarchies established in the area conquested by Alexander the Great.
The second volume, Classical Rome, covers early Rome and Italy, the expansion of the Roman republic, the foundation of the Roman Empire by Augustus, its consolidation in the first two centuries A.D., and the later Empire and its influence on Western civilization.
The editors, John Boardman, Jasper Griffen, and Oswyn Murray--all eminent classicists--intersperse chapters on political and social history with sections on literature, philosophy, and the arts, and reinforce the historical framework with maps and historical charts. The two volumes also offer bibliographies and a full index, as well as black and white photographs integrated into the text.
The contributors--thirty of the world's leading scholars--present the latest in modern scholarship through masterpieces of wit, brevity, and style. While concentrating on the aspects essential to the understanding of each period, they also focus on those elements of the classical world that remain of lasting importance and interest to readers today. Together, these volumes provide both a provocative and entertaining window into our classical heritage.

Title:: The Oxford History of Greece and the Hellenistic World

The Oxford History of Greece and the Hellenistic World