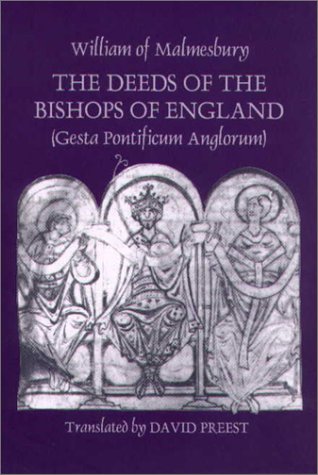 By: WILLIAM OF MALMESBURY

William was born c.1095 not far from Malmesbury in Wiltshire; he entered the monastery at Malmesbury as a boy, and stayed there as a monk for the rest of his life, writing works which were to win him lasting fame as a historian. His Deeds of the Bishops of England chronicles the activities of the bishops in all the dioceses of England from Augustine's arrival in Canterbury in 597 down to the 1120s when the work was being written; in addition to bishops and cathedrals, William also includes saints who were not bishops, and religious houses other than cathedrals. For the period after Bede's death in 730, it is the most important single source for English church history, and indeed, together with William's other great achievement, the Deeds of the Kings of England, for the history of England. Much of the material William retells in his own style, and with considerable narrative skill, from earlier sources available to him in the monastic library. But he also travelled widely in England, and the organisation of the Deeds reflects a clear chronological and topographical order, from Canterbury and Rochester to London, East Anglia and Wessex, north to York, Lindisfarne and Durham, thence to Mercia, and finally, "returning home after a long journey," to his own abbey of Malmesbury and St Aldhelm.

Title:: The Deeds of the Bishops of England (Gesta Pontificum Anglorum) by William of Malmesbury (Ecclesiastical History/Religion)