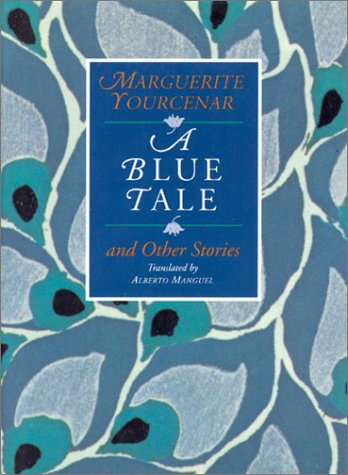 A Blue Tale and Other Stories

Published to great acclaim in France in 1993, this collection is not only a delight for Marguerite Yourcenar fans but a welcome port of entry for any reader not yet familiar with the author's lengthier, more demanding works. The sole published work of fiction by Yourcenar yet to be translated into English, this collection includes three stories written between 1927 and 1930 when the author was in her mid-twenties. These stories cover a range of themes, from an allegory on greed and a scene from the war of the sexes, to a witchhunt that obsessively creates its own quarry.
For the devoted readers of Yourcenar, this collection allows a rare glimpse at the beginnings of a writer's craft. In these accomplished but forgotten pieces, edited and introduced by her biographer, Josyane Savigneau, the reader will find the blend of fable and fairy tale of "Oriental Tales," the psychological chronicle of "Dear Departed," the ironic realism of "A Coin in Nine Hands." Read as an introduction to Yourcenar's work, the stories take us into the writer's workshop, as it were, to the early days of creation. In either case, "A Blue Tale and Other Stories" carries the unmistakable voice of a formidable and vastly talented writer.
Marguerite Yourcenar (her pseudonym was an anagram of her family name, Crayencour) was born in Brussels in 1903 and died in Maine in 1987. One of the most respected writers in the French language, she is best known as the author of the best-selling "Memoirs of Hadrian" and "The Abyss." She was awarded many literary honors, most notably election to the Academie Francaise in 1980, the first woman to be so honored."

Title:: A Blue Tale and Other Stories

A Blue Tale and Other Stories