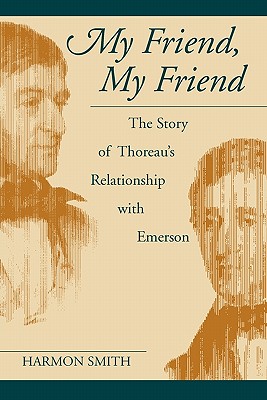 My Friend, My Friend: The Story of Thoreau's Relationship With Emerson

Henry David Thoreau was a twenty-year-old scholarship student at Harvard when he met Ralph Waldo Emerson in 1837. Emerson, fourteen years Thoreau's senior and independently wealthy, had recently shaken the intellectual world of New England with the publication of Nature. Despite the disparity in their circumstances, Thoreau and Emerson quickly formed a close relationship that lasted until Thoreau's death at the age of forty-four. This book tells the story of their friendship. Harmon Smith emphasizes their personal bond, but also shows how their relationship affected their thought and writing, and was in turn influenced by their careers.Without Emerson's interest and support, it is unlikely that Thoreau could have expended the energy on writing that enabled him to achieve greatness. By inviting Thoreau into his home to live during two different periods in the 1840s, Emerson effectively made Thoreau "one of the family." He provided him with work, lent him money, and allowed him to build a cabin on the shore of Walden Pond. Emerson also broadened Thoreau's horizon immeasurably by introducing him to an ever-widening circle of friends and colleagues.Although the bond between Thoreau and Emerson was strong, their needs were often greatly at variance. While this led to a prolonged period of estrangement between them, they were ultimately able to reconcile their differences. Many years after Thoreau died, Emerson could look back over his long life and say that Henry had been his best friend. Since the thoughts and feelings of the two men are so well documented in their journals and letters, Smith is able to trace the pattern of their emotional involvement in great detail. What emerges is both a remarkable portrait of their relationship and an intimate look at the nature of friendship itself.

Title:: My Friend, My Friend: The Story of Thoreau's Relationship With Emerson

My Friend, My Friend: The Story of Thoreau's Relationship With Emerson