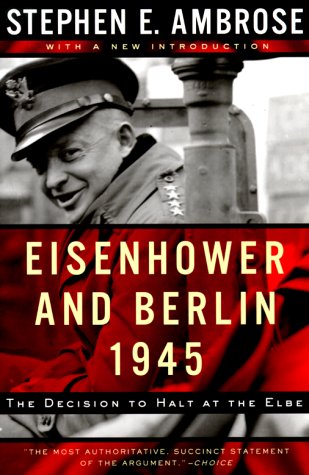 Eisenhower and Berlin, 1945: The Decision to Halt at the Elbe

Behind this decision lay another. Whose forces would be the first to reach Berlin? General Dwight David Eisenhower, supreme commander of the British and American armies, chose to halt at the Elbe River and leave Berlin to the Red Army. Could he have beaten the Russians to Berlin? If so, why didn't he? If he had, would the Berlin question have arisen? Would Germany have been divided as it was? Would the Cold War have assumed a direction more favorable to the West? In a narrative of steady fascination, Stephen E. Ambrose describes both the political and the military aspects of the situation, sketches the key players, explains the alternatives, and considers the results. The result is a sharply focused light on an important question of the postwar world. This paperback edition features a new introduction by the author.

Title:: Eisenhower and Berlin, 1945: The Decision to Halt at the Elbe

Eisenhower and Berlin, 1945: The Decision to Halt at the Elbe