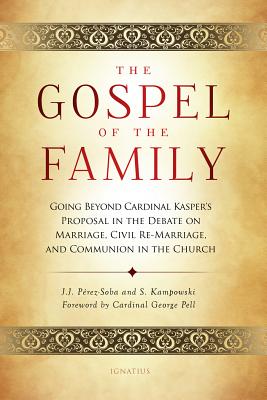 The Gospel of the Family: Going Beyond Cardinal Kasper's Proposal in the Debate on Marriage, Civil Re-Marriage and Communion in the Church

Entering into the Bishop's Synod on marriage and the family started by Pope Francis, and welcoming his invitation to have a frank discussion, this volume endeavors to present a proposal which, as the sub-title indicates, will spell out well-founded critical reservations about the line of argument suggested by Cardinal Walter Kasper, while admiring some of its elements.

This book, however, is intended above all as a positive contribution that describes an alternative merciful pastoral approach inspired by the Magisterium and by the testimony of Saint John Paul II, whom Pope Francis has held up to the whole Church as "the Pope of the Family." It is an approach that tries not just to please, but truly to "heal the wounds," and therefore to promote a true conversion, thus closely uniting doctrinal and pastoral considerations, truth and mercy, fidelity to the words of Jesus and attention to the specific person.

Taking then as a point of reference for this subject are the controversial words by Cardinal Kasper, which the authors think contains important reflections, but significant inaccuracies and erroneous proposals also and, above all, gross oversimplifications because of an objective that concentrates excessively on a single argument, which causes him to see everything else from that perspective. This volume strives to develops his positive points, help clarify the ambiguous ones, express the reasons why some statements seem to be seriously erroneous but, above all, go farther than Kasper and show in a simple, accessible way the extent to which his words were incapable of putting the Gospel of the Family at the center of its reflections.

The authors begin by addressing the cultural challenge as the fundamental key to understanding the role of the family in the dialogue between the Church and the world: a pivotal point if we are to avoid the many inadequate misunderstandings of Kasper's words. Next, they identify the centrality of the family in the Christian proclamation, adopting the perspective of a God who reveals himself as mercy, an approach that we will complete with a brief review of some patristic texts that teach the way in which the primitive Church experienced the question. Then they analyze the matter from the more contemporary moral perspective, considering therefore the construction of the moral subject by means of his actions, and we will conclude by outlining what could be "adequate pastoral care," given the challenges of our time.

Title:: The Gospel of the Family: Going Beyond Cardinal Kasper's Proposal in the Debate on Marriage, Civil Re-Marriage and Communion in the Church

The Gospel of the Family: Going Beyond Cardinal Kasper's Proposal in the Debate on Marriage, Civil Re-Marriage and Communion in the Church