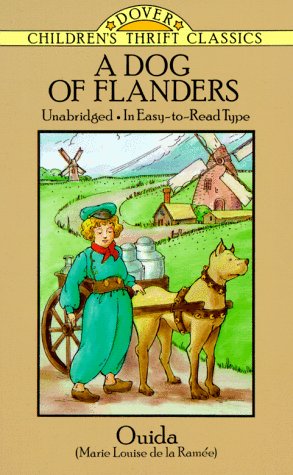 Marie Louise de la Ram e (1839-1908) wrote many popular novels of adventure and romance in the 1870s and 80s under the pen name of Ouida, among them such well-known works as Under Two Flags and Held in Bondage. She also produced a number of captivating stories for youngsters. One of the best, A Dog of Flanders, is presented in this handsome edition -- complete, unabridged, and newly set in large, easy-to-read type with six original black-and-white illustrations by Harriet Golden.
First published in 1872, A Dog of Flanders tells the moving story of Nello, a gentle boy with aspirations of becoming a painter, and Patrasche -- his devoted Belgian work dog. The two, along with Nello's grandfather, live in a little village near Antwerp where Nello's idol, the artist Rubens, once worked. Nello and Patrasche suffer countless hardships -- poverty, hunger, cruelty, and rejection. But they persevere in the face of adversity, up to their tragic, bittersweet end.
Rich in the sentiment of its Romantic tradition, yet convincing in its portrayal of both human and animal nature, this touching classic has tugged at the heartstrings of readers and listeners alike for generations. It remains one of the nineteenth century's most imaginative and arresting works of fiction for children.