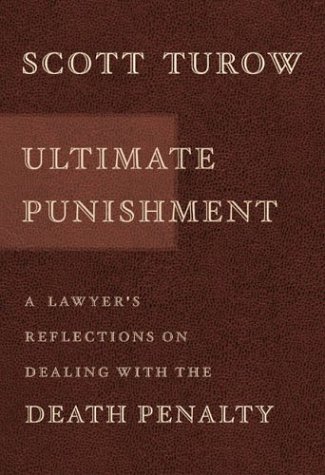 Ultimate Punishment: A Lawyer's Reflections on Dealing with the Death Penalty

America's leading writer about the law takes a close, incisive look at one of society's most vexing legal issues
Scott Turow is known to millions as the author of peerless novels about the troubling regions of experience where law and reality intersect. In "real life," as a respected criminal lawyer, he has been involved with the death penalty for more than a decade, including successfully representing two different men convicted in death-penalty prosecutions. In this vivid account of how his views on the death penalty have evolved, Turow describes his own experiences with capital punishment from his days as an impassioned young prosecutor to his recent service on the Illinois commission which investigated the administration of the death penalty and influenced Governor George Ryan's unprecedented commutation of the sentences of 164 death row inmates on his last day in office. Along the way, he provides a brief history of America's ambivalent relationship with the ultimate punishment, analyzes the potent reasons for and against it, including the role of the victims' survivors, and tells the powerful stories behind the statistics, as he moves from the Governor's Mansion to Illinois' state-of-the art 'super-max' prison and the execution chamber.
This gripping, clear-sighted, necessary examination of the principles, the personalities, and the politics of a fundamental dilemma of our democracy has all the drama and intellectual substance of Turow's celebrated fiction.

Title:: Ultimate Punishment: A Lawyer's Reflections on Dealing with the Death Penalty

Ultimate Punishment: A Lawyer's Reflections on Dealing with the Death Penalty